Tuberculosis is an airborne infection caused by the organism Mycobacterium tuberculosis that mainly affects the lungs.

Tb manifests in various forms. The most common form is the pulmonary tuberculosis (TB in lungs). Other forms of TB usually referred to as extrapulmonary TB ( TB in places other than the lungs] includes, but is not limited to:

Signs and symptoms of TB include

Treatment of tuberculosis involves a combination of the following:

Table of Contents What is sepsis?Sepsis with Pneumonia and other infectionsThe tragic case of Ifedolapo OladepoWhat are the signs and symptoms of sepsis?What are the three stages of sepsis?Septic shock… 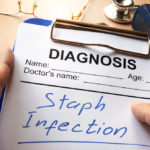 “Staph” which causes staph infections is arguably one of the most widely known disease-causing microbes in Nigeria. The reason for this is not farfetched, as we have rickety cars, mounted…