What is Rhesus incompatibility?

Rhesus incompatibility is a situation where a pregnant woman’s Rhesus blood group [blood “type”] is immunologically dissimilar with that of her baby, in such a way that her body generates antibodies that potentially could attack the baby’s blood cells with serious complications. It occurs in women that are Rhesus negative [Rh-], is married to Rhesus positive [Rh+] husbands, gets pregnant with a Rh+ baby, and have been exposed to Rh+ blood before.

A Cause Of Recurrent Still Births, And Neonatal Mortality/Morbidity.

Her 5-day old baby has not been suckling well for the past 2 days. And each time he cried, he did so with a high-pitched voice, almost like the shrill of a Banshee. Just that morning, he had a convulsion. And a day before that, his limbs had become stiff, difficult to bend, like a lead pipe. He was born healthy but had developed deep yellowness of the whites of his eyes just a few hours after delivery.

Her Mama had told her it was nothing; that all they needed was to be exposing him to the early morning sun, and he would be fine. This was her fourth child; the first three were stillborns, and she had thought it was mother nature’s way of punishing her for that baby she aborted at 4 months. And finally, after appeasing the spirits in her village shrine, they had allowed this one to live, only to afflict him with this strange illness.

The story above mirrors the possible ordeal of recurrent stillbirths, and severe neonatal jaundice, due to Rhesus incompatibility and subsequent isoimmunization.

The Concept of Blood groups

Human red blood cells bear a variety of surface markers, called antigens, that enables the body’s immune system to identify them. For the purpose of this discourse, let’s view such antigens as ID CARDS and the immune system as BOUNCERS.

This is the basis for labelling an individual as having Blood groups A, B, AB, or O.In the Rhesus system; red blood cells are either identified as positive [RhD+] or negative [RhD-] depending on whether they possess the Rhesus D antigen [ID card], or not.

This forms the basis for the superscripts, + or -, attached to one’s blood group. Thus an individual that is O positive [O+] is rhesus positive, while one that is O negative [O-] is rhesus negative, even though both belong to blood group O, of the ABO system. It’s just like having two Nigerians having the same national ID card, but different work ID cards.

The concept of Rhesus isoimmunization

The immune system is wired in such a way as to protect self by identifying intruders and dealing mercilessly with them. Like an immigration officer, it checks the ID card [surface antigen] of every foreign cell that enters the body and sends bouncers [antibodies] after anyone that bears an ID card that is not similar to the one present in the body.

Rhesus isoimmunization thus occurs when a rhesus negative woman’s immune system is SENSITIZED– following exposure to an incompatible, rhesus positive blood– to produce antibodies against rhesus positive red cells. Such antibodies, in a woman pregnant with a rhesus positive fetus, can cross the placenta, enter the baby’s bloodstream, and destroy the red blood cells therein, leading to life-threatening complications in the fetus/baby.

This usually occurs in pregnancies other than the first and is due to the destruction of fetal red blood cells leading to severe anaemia and or jaundice.

This leads to the failing of the heart, even inside the womb. Depending on the severity, it can lead to the following; – Hydrops fetalis; a condition in which the baby’s whole body is swollen from excessive fluid accumulation. – Stillbirth.

This is a component of a condition called Hemolytic Disease of the Newborn, which may be accompanied by severe anaemia, or not. Accompanying jaundice may manifest as, or lead to;

Is Rhesus disease possible in the first pregnancy?

Even though unlikely, the answer is yes. If feto-maternal haemorrhage occurs in the first trimester, from physical trauma, or invasive obstetric procedures; or if the woman had been transfused prior with a rhesus positive blood– it is possible in the first pregnancy.

Prevention and Treatment of Rhesus Disease

Rhesus disease is 100% preventable. Below are some of the preventive measures.

Every woman, pregnant or not, should be aware of her blood group. That’s the only way to know if one is rhesus negative, and take conscious steps at prevention. – RhoGAM should be administered within 72 hours to every rhesus negative woman after any of the following;

This is for women that are already isoimmunized due to previous exposure. – Early antenatal booking is golden. – Indirect Coomb Test should be done as necessary to confirm isoimmunization. – If positive, antibody titre should be monitored serially, and actions are taken when necessary. – Invasive procedures should be avoided; and when done, they must be followed by a shot of Rhogam. – Fetal wellbeing should be monitored monthly with Ultrasound.

This involves measures taken to salvage the life of the fetus, or the newborn, and include things like neonatal resuscitation and stabilization, phototherapy, and exchange transfusions, as indicated.

SHOULD RHESUS INCOMPATIBILITY, LIKE GENOTYPE [AND THE RISK OF HAVING OFFSPRINGS WITH SICKLE CELL DISEASE], INFORM THE CHOICE OF A LIFE PARTNER?The answer is UNEQUIVOCALLY no, for the following reasons;

“My Wife And I Are Both Rhesus Positive; How Come Our Child Is Rhesus Negative?”– Worried Man.

SCENARIOMr. A and Mrs B have been married for years. While Mr A’s blood group is A+, Mrs B’s is B+. So, both are Rhesus positive. They’ve had 3 kids with blood groups A+, B+, and AB+, respectively. So, all their kids are also Rhesus positive. Mrs B has had another child, whose blood group has however turned out to be A-. This means that the child is Rhesus negative. From the rules of basic genetics, at least as best known to Mr A, it is impossible for a couple who are both positive [+] to have a negative [-] child. Where did the [-] come from? Could his loving wife have cheated on him, giving him an illegitimate child? He wonders.

The clinically most important antigen in the Rhesus system is the D antigen. This is because, it what is responsible for virtually all the problems associated with the Rhesus system.For this reason, and the fact that it exerts itself whenever present, it is considered the “dominant antigen,” and is represented as “R” in rhesus genotype shorthand; while the less clinically important ones– Cc and Ee, are represented as “r.”

While checking for someone’s Rhesus blood group in a lab, what the method used usually ascertains is if the important antigen, D– coded for by “R” — is present, or not. If it is present, the person is considered Rhesus positive, represented by the superscript “+”. If it is absent, the person is considered Rhesus negative, and given the superscript “-“.This is, however, an oversimplification of a rather complex system, and even more complex pattern of inheritance. The answer we seek is unfortunately buried in the sea of that complexity, so we’d have to ride into the wave to decipher it.

Considering that every individual inherits one-half of their gene, for every specific trait, from either of their parents– one half from the mother, and the remaining half from the father; the following are the possibile combinations obtainable in the Rhesus system:

In each of the above possible combinations, one of the Rs– whether in the form of “R,” or “r;” would be inherited from the father, and the other from the mother. Remember, once R is present, the person is considered as Rhesus positive, but if absent, the person would be considered Rhesus negative. So, anyone with the genotypes in numbers 1 and 2, would be Rhesus positive, while those with the genotype in number 3 would be Rhesus negative.

So, if the genotypes of the couple in the scenario above are both “Rr,” they may both have given their offspring one “r” gene each.This would mean that he would end up with the “rr” genotype.So, this is why it is possible for a couple to be both Rhesus positive [+] and end up having a Rhesus negative [-] child.

In real life, the usage of blood grouping– whether the ABO system or the Rhesus system– in determining the paternity of a child is limited. While it may be used to confirm, to a reasonable extent, that a child DOES NOT belong to a man, it CAN’T be used to confirm that a child belongs to a man. In the above not-so-hypothetical case, knowledge of the pattern of inheritance of Rhesus blood groups will only tell us that it is not impossible that the man sired the baby; it won’t, however, prove categorically that he did. 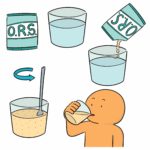