Want to find out how people recover from COVID-19 even when there is no cure or vaccine yet, then continue reading.

Most respiratory viruses– including Coronaviruses such as the ones that cause the Common Cold — are self-limiting, so to say. What this means is that they have a relatively finite period in the human body before they “wear themselves out,” or the immune system contains them, and the sufferer recovers.

Treatment for these viruses is thus mostly aimed at

Most times, treatment is not aimed at curing such viral illnesses, by attacking the virus itself. This is partly because they’re self-limiting, and partly because developing antiviral medication is darn difficult due to the fact that they mutate so rapidly, and are more or less like shapeshifters. Ergo, if you develop a treatment against this form today, tomorrow they may mutate into a form resistant to said treatment.

So, the best form of treatment for such viruses is prevention, either by modification of social and lifestyle habits, to break the chain of transmission; or by vaccination.

If someone however becomes infected, treatment, as the immune system slugs it out with the virus, is usually supportive, and not definitive.

Before we move on to COVID-19, I want to make a distinction and clarification between two forms of treatments- supportive treatment, and definitive treatment.

In the context of infectious diseases, definitive treatment entails treatment targeted specifically at the offending organism, aimed at eliminating it from the body. Once this is done, the body– through its repair mechanisms, heals itself of the damage already caused by the organism, and the person recovers.

An example is use of antimalarial drugs to treat Malaria, and antibiotics to treat bacterial infections.

This, in the context of infectious diseases, is treatment not aimed at eliminating the organism, but relieving its symptoms, and supporting vital bodily functions already compromised by it, while waiting for, or hoping that, the immune system will contain said infection.

So, if the person is having a distressful cough, you may have to give cough syrups to suppress it; if there’s fever, you may have to use antipyretics, such as paracetamol, to relieve it; if in pain, analgesics may be used generously to make the patient more comfortable; etc.

If the infection compromises the function of certain vital organ systems, and the person is at risk of dying without optimal functioning of said system, you support the organ’s function:

For failing lungs; oxygen, and ventilators, may be needed.For cardiovascular collapse; fluids, and vaso-pressors may be given.For kidney failure; dialysis may come in handy. Etc.

However, if the damage caused by the organism in its wake is too much, and your supportive treatment could not keep the person alive to see the end of the battle between immune system and bug, the person dies.

How do people recover from COVID-19 without treatment?

For COVID-19, the “finite” period of battle between immune system and virus is usually between 2 to 6 weeks– up to 8 weeks in some instances, depending on the competence/resilience of the person’s immune system, among other things.

If one is able to withstand the onslaught of the virus within this period, the person would pull through, sometimes without any treatment, other times with supportive treatment, all depending on the severity of the disease.

To put this in context, COVID-19 has 5 clinical variants BASED ON SEVERITY.

NB: This classification is based solely on the effect of the virus on the respiratory system, its primary target in the body. That however does not mean that the virus only affects the lungs.The form of the disease one develops depends on a host of factors including.

People with asymptomatic and mild to moderate forms of the disease don’t need much help to recover; sometimes they’re even advised to stay at home, especially in countries whose Hospitals are already overwhelmed, and are managed with minor conservative/supportive measures to relieve symptoms such as fever, headache, chest pain, and cough.

People with severe and critical forms of the disease would need Hospital admission and a lot of supportive measures, including oxygen therapy, ventilators, anti-shock therapy– if necessary, and the full complement of ICU care.

If conservative measures are enough to sustain the person, the person could still pull through even without specific antiviral therapy. 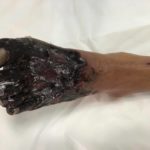 Do you know why you should not ignore pain when felt from any part of your body? Pain is often an indicator of an underlying tissue injury. It is mostly…