Nail problems can be a sign of diseases. If you want to know why nails change colour or shape, then read on.

Nails are an appendage of the skin which is the largest organ in the body. The nail is a mirror to disorders or dysfunction of the internal organs such as the lungs, kidneys, heart, and liver. An abnormality in the colour or shape of the nail (associated with nail problems) may be the first sign of a disease of the internal organs.

Here are 10 nail problems that may mirror a systemic disease.

When the nail becomes clubbed later in life, it may be an indication of an internal organ disease. Finger clubbing is commonly caused by heart diseases such as infection of the heart (infective endocarditis) and in people who are born with a hole in the heart.

Respiratory diseases like cancer of the lungs, cystic fibrosis, lung abscess (Infection of the lungs in which pus accumulates inside the lungs) and mesothelioma.

If you appose your two index finger nails, there is a little gap in between which is normal but if this is absent, you probably have finger clubbing.

Onycholysis is when there is a separation of the nail plate from the nailbed. The nail therefore appears whitish and if dirt gets into this space between the nail bed and nail plate, the nail appears yellowish.

Use of irritant nail chemicals may also cause this nail change. The separated nail eventually detaches and gives room for new nail to grow from the nail bed.

The whole of the nailbed appears bluish to dark and dusky. Cyanosis results from low oxygen saturation which reduces oxygen at the hand and leg, this then causes the oxygen deprived tissues of the nail to appear bluish. Cyanosis may be due to exposure to cold or low blood pressure from blood loss, hear disease, sepsis etc. In children born with a hole in the heart, cyanosis may be seen in addition to finger clubbing.

Named after the person who described them, Beau’s lines are grooves or band-like depressions across the nails. It may result from a plethora of diseases such as heart attack, severe pneumonia, anaemia, poor nutrition and psychological stress.

Spoon shaped nails or koilonychias is a depression in the middle of the nail that gives rise to a groove. The cause may be unknown and not indicative of any systemic disease.

It may also result from iron deficiency anaemia, thyroid disease, cancer of the oesophagus and trauma to the nail.

Nails may have depressed tiny pits like dots. This is referred to as nail pitting. It is commonly seen in autoimmune disease conditions such as psoriasis, atopic dermatitis, alopecia areata and dermatomyositis.

Splinter haemorrhages are tiny bleeding under the skin which may be numerous in one finger or affecting almost all fingers in the body. It may be insignificant if only one nail involved.

The likelihood of systemic disease when all nails are involved is much higher.

This may also be caused by trauma to the nail. Other causes include infective endocarditis (infection of the inner covering of the heart), rheumatic heart disease, autoimmune conditions like antiphospholipid syndrome and systemic lupus erythematosus.

This is when there is a brownish or black nail discolouration and may be normal in people of the black race.

It is could be caused by malnutrition, HIV, smoking and thyroid disease.

Antiviral drugs and anti-epilepsy drugs may cause this nail change as well.  It may also be the first evidence of cancers such as malignant melanoma.

Nicotine deposits in the nails make them appear yellowish in colour. This is more common in heavy smokers.

Presence of nicotine stain in the skin indicates that the individual is a heavy smoker and is at higher risk of lung cancer and chronic obstructive pulmonary disease (COPD).

In summary, the nail has various components. Nail changes may be from either one or more of the parts of a nail. Even though some of these nail changes may also be seen in normal healthy people, It is always a good idea to see your doctor (dermatologist) when you note new unexplained changes in your nails. 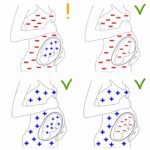 Table of Contents What is Rhesus incompatibility?A Cause Of Recurrent Still Births, And Neonatal Mortality/Morbidity.The Concept of Blood groupsThe concept of Rhesus isoimmunizationCauses and risk factors of Rhesus diseaseComplications of…