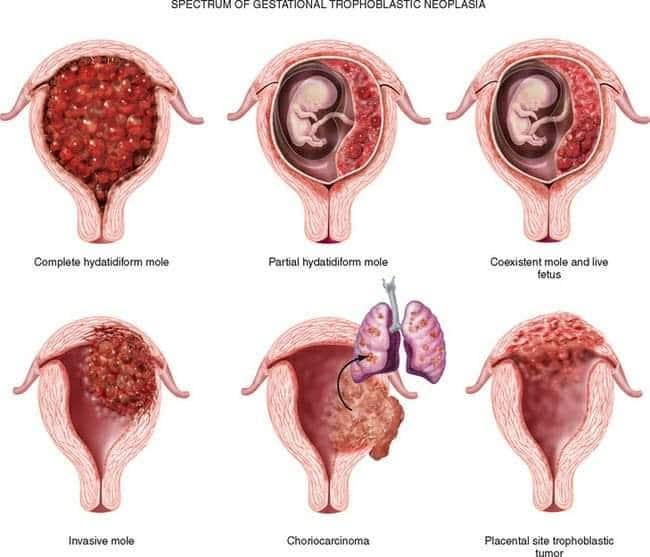 What Are Gestational trophoblastic tumours?

They are otherwise called pregnancy-related tumours because a gestational/pregnancy event is prerequisite for the development of these tumours. The “gestational event” that serves a as a precursor may be in the form of a normal pregnancy still in progress, a miscarriage, an abortion, an ectopic pregnancy, a premature delivery, or even after a normal term delivery.

She came in with a protuberant tummy, pale, weak, wasted, and in pain. Only 4 months prior, she had missed her period, and a positive PT confirmed pregnancy. However, because “fiancé” bailed on her, she had it terminated using MVA.

Two months passed, and her tummy was still filling out; the baby bump was unmistakable. What more, she was still having early pregnancy symptoms, and they seemed overly exaggerated.

Fear became her. Was this the way the universe has chosen to punish her for terminating her unborn? Perhaps it was the spirit of her dead child tormenting her!

A repeat pregnancy test done by her, two months after she evacuated her baby, was still positive. Even though she had not had sex since then!

But! She saw the embryonic mass of tissue sucked out of her womb by the vacuum effect of the MVA. Red mass of tissue; she saw it with her own eyes. And they kept on going until only foamy red fluid, signifying an empty womb, remained.

Terrified, she had gone to consult “the elders” at a native doctor’s shrine. However, the idiots were silent; the throw of cowry shells could not get them to talk.

Then she developed severe tummy aches, started losing weight, became weak, and was increasingly finding it difficult to breath. That was when she knew it was time to consult “Ortwer gbim gbim — the main, the main doctor.” His own “gods” are never silent; they always communicate with him through that thing he puts in his ears [ the stethoscope].

The history was unmistakable, so was the examination findings. So, it didn’t take “Ortwer gbim gbim” time to know what was wrong with her.

Fact? She was not pregnant; she had a type of cancer mimicking pregnancy, making her think she was still pregnant.

After fertilization, the fusion of the male and female gametes– sperm cell and egg cell; a zygote is formed. This zygote undergoes a series of changes to form what is called a blastocyst.

The blastocyst consists of two main parts: the embryoblast — which goes on to form the foetus or baby; and the trophoblast, from which the placenta develops. While foetal development is largely dependent on maternal genes, trophoblastic differentiation and placental growth is dependent on paternal genes.

In GTDs, due to an “over dosage” of paternal genes [which controls trophoblastic/placental growth], there is excessive proliferation– exaggerated growth, of the trophoblast [placental tissue] leading to tumour formation.

The “over dosage” of paternal genes may occur either in the form of 2 sperms fertilizing 1 egg, or 1 sperm fertilizing an egg, and then replicating its DNA later to make it double the usual dose.

Because pregnancy tests make use of detection of a hormone called Beta hCG, which is produced by placental tissue; in these conditions, PT would still be positive, irrespective of the absence, or presence, of a baby.

Gestational trophoblastic tumours are broadly classified into malignant [or cancerous], and non-malignant types.

These are by far the commonest. They are called Hydatidiform MOLES [Molar pregnancy]. They characteristically lack the ability to erode surrounding tissues and to spread to distant organs. They include:

These are thankfully less common. They have the ability to erode the womb, invade surrounding tissue, and metastasize [spread to distant sites]. The good news, however, is that they are treatable with close to 100% success rate; they are the cancers with the highest rate of successful treatment. Let us just say, if you must have cancer, these are the ones to have; they can still be CURED even when they have spread! They include:

The ultimate risk factor is a gestational event, as stated above. It does not matter if conception [the formation of a baby] took place or not. And if it did, it doesn’t matter if it terminated in a miscarriage, an abortion, or was carried to term and delivered.

Other risk factors include:

There is usually a period of amenorrhea [cessation of periods], whether confirmed with a PT, or not, followed by any of the following:

Gestational trophoblastic tumours could be diagnosed with proper history, examination, ultrasound, and most importantly serial measurement of Beta hCG [the hormone used to confirm pregnancy] as the level rises to tens of folds of what it is in normal pregnancy.

The Non-malignant GTDs can be treated with the same procedure used in performing abortions: evacuating the womb using an MVA kit.

The malignant ones would need treatment using anticancer drugs. As stated above, the prognosis is VERY GOOD, even when it has spread.

After every evacuation of the womb, whether for an abortion, or to complete a miscarriage, samples of the tissue removed from the womb should be sent to a lab to rule out a GTD. It was not done for the woman in the story I shared, that was why she presented with complications at a very late stage.

I also PERSONALLY advice women to do a repeat pregnancy test on their own after one month of a miscarriage, or an abortion; and report to a gynaecologist, if it remains positive, for further evaluation [Note that under normal circumstances, after an abortion, or miscarriage, pregnancy test may still remain positive for up to a month. However, if it remains positive after 4 to 6 weeks, then there is need for further evaluation].

Also, after every delivery, the placenta should be thoroughly examined for molar vesicles by the midwifery team that took the delivery.